We can organize rides on the island since it’soffered to do so. Either near us, in the area of Perdika or in various other parts of the island. 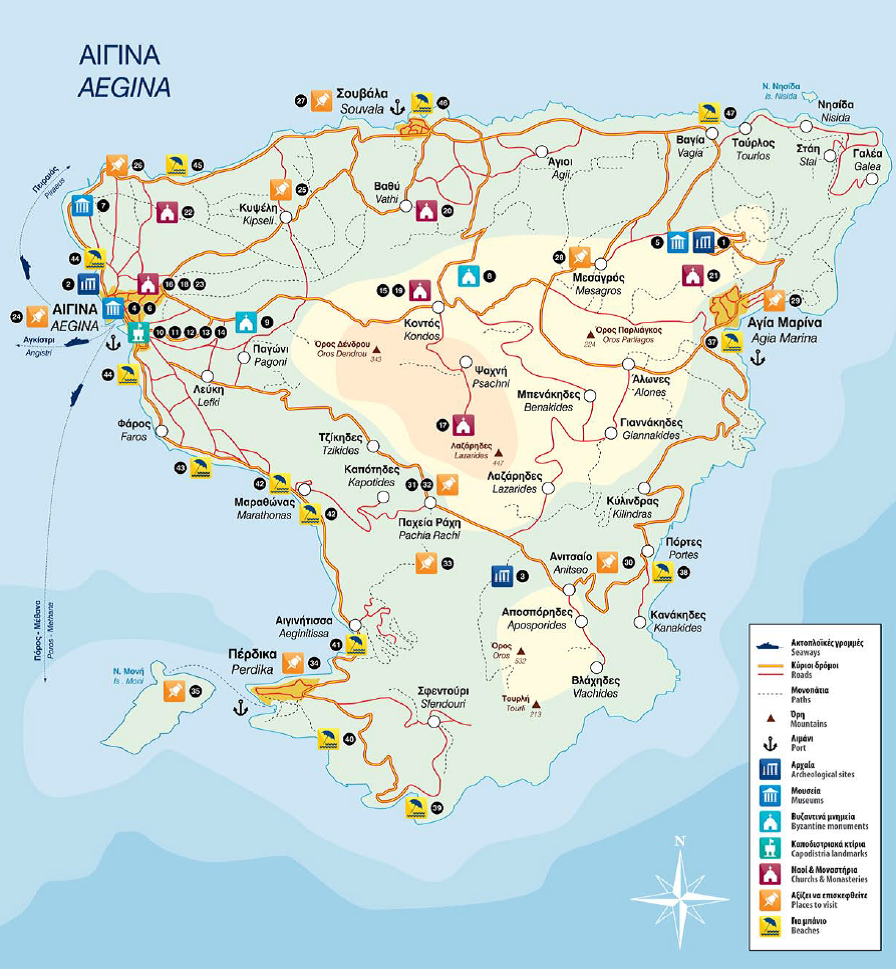 Τhose customers who have their own or rented bikes can use our suggestions and take a ride on the island that will please them very much.

there are maps of trails and our customers who like to walk will discover places that most people have not ever seen            (http://energoi-aegina.gr/category/trails/) & (http://www.monopatiapolitismou.gr/cms/?p=786&lang=en )

Tour of the island by car

either by owned or rented car, the visitors can experience the entire island in one day trip

Just north of Aegina town is the hill with one single column (kolona in Greek), last remnant of a Doric Temple of Apollo, which was torn down with others - because they were deemed idolatrous - in the 4th century AD. Built in 520 BC of the porous Aegina sandstone, it stood on the site of previous temples on the prehistoric acropolis. It had 11 columns on the longer sides and 6 on the shorter ones. The upper portion of the one that remains is gone, fallen (along with the architrave) sometime after 1765. A second column lasted till 1802, when it toppled during a storm. The frontispieces of the temple were made of Parian marble and depicted Amazonian battles.
English architect Charles Robert Cockerell was the first to excavate the Hill of Kolona (1811). In 1903 a second excavation was carried out by Estonian O.M. von Stackelberg and German archaeologist A. Furtwangler, followed by still others in 1924 and 1966 - German archaeologist Gabriel Welter and German professor, Hans Walter, respectively. The latter was director of the Bavarian Academy. These last excavations brought to light the remains of 11 successive settlements on the same site which reflected the ongoing development of fortification systems in prehistoric times, as well as increasing sophistication of dwellings.
The area was inhabited from around 3000 BC, from which time it was occupied continuously for two millennia, during which it withstood many attacks. Fortification consisted of walls enclosing the eight oldest towns; the other three shared a wall with the city below. Most houses were built of sun-dried bricks with stone foundations, others of woven grass, rushes and clay, with flat roofs made of the same materials. The towns manifest successive development, each more sophisticated than the one that preceded it. When the temple of Apollo was pulled down, a large structure with a water tank replaced it. Foundations of other, smaller temples, have been found to its west, temples dedicated to Dionysus and Artemis. There was also a very impressive theatre, a parliament building (the Voulefterium), as well as a stadium, whose stone seats were re-used later, in the 3rd century AD, in the construction of fortifications. Another temple was dedicated to Delphinian Apollo, who protected sailors. Contests were held in his honor in which men raced one another with clay jugs full of water on their shoulders, this during the month called "Delphinium". According to Velter, Apollo was also named Delphinius and the Aegenetians honored him so intensely that they replaced their old coin, with its image of the turtle, with one depicting the dolphin.
There were other temples dedicated to Athena, Demeter, Heracles and Hecate, the moon goddess, who was honored in festivals lasting 16 days. A healing center (Asclipeio - named for the god of healing, Asclepius) was mentioned by Aristophanes. A synagogue with a mosaic floor is found in the Karantina area which was settled by Jews (near the military port). Rock tombs, dating to the 6th century BC, are also found near the ancient town. There was a commercial port as well as a military port (also called "the hidden port") where warships were concealed. During the 8th century BC, Aegina was a large nautical power. Guard towers studded the city walls by the sea. The city was destroyed by Saracen pirates during the 10th century, along with a good portion of the island, and the inhabitants took refuge in the inland fortified hill village of Paleachora, which became the island capital for about 1000 years.
The port complex, which took advantage of the many tiny coves lining the coast in this area, was one of the most important technical projects of the era. It began at the cape of St. Apostoloi, at Plakakia (northwest of the city), and ended up at the cove of Marathonas, with rows of constructed sea walls and breakwaters, the central portion consisting of the commercial and military / Karantina ports below the Hill of Kolona. Fragments of the sea walls remain below the surface of the sea. The passages that led between the towers guarding the ports were closed off with chains.
The Archaeological Museum of Aegina, now located on the site of Kolona, was established in 1828 by the first Governor of Greece - Ioannis Kapodistrias as The National Archeological Museum. A fine collection of artifacts was established here, including, by the end of 1830 (amongst other items) over 1,000 coloured vases, 108 lamps, 137 weapons, and 359 coins. Originally the museum was housed in the Orphanage (Filakes) and was moved a few times before it found its current site in 1981.
On visiting the museum you will find 3 main halls where you can while away an interesting hour or more viewing the surprising number of artifacts. In the entrance area you will be greeted by a marble Sphinx. This is a votive monument of the early classical period (460 BC) which was dedicated to the Temple of Apollo. It is an exceptional sculpture which has the head of a woman with a body that is half eagle and half lion. The Sphinx was excavated from the Kolona site in 1903. This will surely be one of the highlights of your visit to the museum, but there are many other interesting items to explore.

It is mentioned by Pausanias in the 2nd century A.D. Later on, probably in the 3rd century A.D., the metal clamps bonding the architectural members of the temple, were removed and, as a result, parts of the superstructure collapsed. Its position, though, was not forgotten in the following centuries.
In 1811, the English Cockerell and the German von Hallerstein, stole the sculptures of the pediments and transferred them abroad, to sell them later to king Ludwig I of Bavaria. Today they are on display in the Alte Glyptothek of Munich.
The first systematic archaeological investigation was begun in 1901 by the German Ad. Furtwaengler. Work was resumed in 1966 by the German D. Ohly, who excavated on the site until 1979 and was continued by his collaborators until 1988.

It is situated on the top of a hill covered with pines, in the NE part of the island, and is distinguished by the very good preservation of the Late Archaic temple.
The sanctuary was initially dedicated to the cult of Aphaia, a local deity later assimilated by Athena. Finds dating from the prehistoric period - including figurines of breeding women - point to the conclusion that the cult was established very early, possibly in the beginning of the 2nd millenium B.C. Judging from votive offerings and, mostly, from building activity, the sanctuary flourished mainly in the Archaic period. At the end of the period, around 500 B.C. and a little later, the sanctuary assumed the monumental form it preserves today. The area was evened off by the construction of isodomic walls which retained the earth on which the temple was erected, along with the altar, the propylon and various lesser buildings. A second period of prosperity came in the mid-4th century, leaving its traces on the remodelling of the altar and the construction of new buildings to the SE of the temenos. Pottery evidence of the following periods suggests restricted activity on the site until the beginning of the 1st century B.C., when the sanctuary definitely declined.

The temple of Aphaia stands on a pine-clad hill in northeast Aegina. It is the most important monument in the sanctuary of Aphaia, which appears to have been founded on a site used for worship since the Mycenaean period. Pausanias (2, 30, 3-5) mentions the myth of Aphaia and identifies her with the Cretan divinity Britomartis-Diktynna, an opinion shared by modern scholars. The temple, erected at approximately 500-490 BC, replaced an earlier one, also of tufa, which stood on the same site and with the same orientation. This earlier Doric temple was built c. 570-560 BC and destroyed by fire in 510 BC. At the time of the construction of the new temple, the entire sanctuary was refurbished with new terraces, a stone enclosure wall and an imposing propylon on the south side, all of which contributed to its monumental appearance. Outside the propylon was a series of buildings, which served the needs of the sanctuary. Prosperity was not meant to last, however. The importance and infrastructures of the Aphaia sanctuary declined rapidly following the Athenian domination of Aegina from the middle of the fifth century BC. Some repairs were made in the fourth century, but the third century was a period of decadence and by the end of the second century BC the area was abandoned.
The temple is a Doric, peripteral hexastyle with twelve columns on the flanks. All the shafts are monolithic and fluted, except for three columns on the north side, which are built up of drums. The temple, which stands on a three-stepped crepis, presents the usual arrangement of pronaos, cella and opisthodomos. Both the pronaos and the opisthodomos are distyle in antis, while the cella is divided longitudinally by two rows of five columns each. A ramp of carefully cut stone rises to the crepis on the east side of the temple. The columns, cella walls and entablature were of local porous limestone, which was plastered and painted over. Traces of paint are still visible on the entablature. The two-sloped roof had terracotta roof tiles of the Corinthian type and a single row of marble tiles with palmette-shaped antefixes along the edges. The central, palmette-shaped acroterion, which was framed by two korai, and the four sphinxes on the corners of the roof were also of marble. The pedimental sculptures and the roof acroteria were of Parian marble and painted. The pediments depicted two mythical combats before Troy in the presence of Athena; heroes from Aegina participated in both. The east pediment showed the early expedition of Herakles against the Trojan king, Laomedon, in which Telamon, son of Aiakos, took part. The west pediment showed the later expedition by Agamemnon against Priam, in which three descendants of Aiakos, Ajax, Teukros and Achilles, participated. The west pediment reflects the aesthetics of the sixth century BC, while the east pediment, which is more animated and less stylized, dates to the early fifth century BC.
The temple remained visible and imposing for many centuries after its abandonment. The architect C. R. Cocherell and his friend baron von Hallerstein explored the site in 1811 and removed the pedimental sculptures to Italy. In 1928 the sculptures were taken to Munich, where they remain. The German Archaeological Institute systematically excavated the site under A. Furtw?ngler and H. Thiersch (1901) and more recently D. Ohly (1964-1981). Restoration was carried out by A. Orlandos and E. Stikas in 1956-57.

Visits to churches and monasteries

In Aegina there are many important monasteries and churches you can easily visit, as Paleochora , Saint Nektarios  and more.

We inform you that our lodging is fully booked until the end of the season.